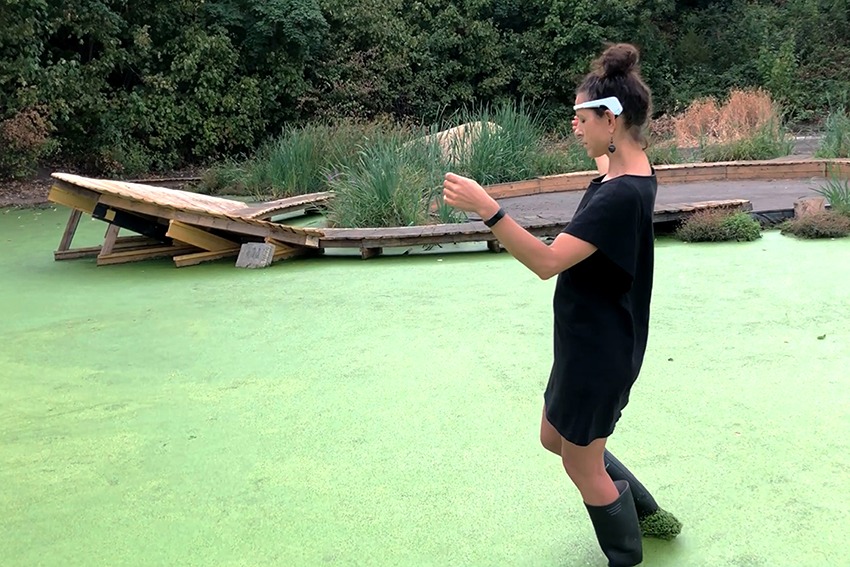 Dominique Savitri BARON-BONARJEE
Goldsmiths University of London
d.bonarjee [ ] gold.ac.uk
Liquidity
Ver / Watch Liquidity
Summary
On 1 January 2018 I began a practice. I named it Liquidity: every day for the indefinite future, I would take at least five minutes out of the day to practice Liquidity. I didn’t know what the practice was, but by committing to doing it, I wanted to find out.
Inspired by Taiwanese artist Tehching Hsieh’s ‘One Year Performance’ series, I wrote myself a similar contract.
By signing it I made a promise, and I was held to it. The practice continued daily for the next 18 months.
What I knew was that Liquidity presented an interval, allowing my body to change register, and so, to change rhythm. By introducing a pause into whatever I was engaged in at the time, I created a space for an open-ended and playful somatic curiosity. What happened during the interval was the ebb and flow of micro-movements that pondered: How is my own agency embedded within the movements of my body? How can I slip between moments of surrender and moments of intention? What role does fear have in interrupting my body’s automatic calibration in response to gravity? What other entities are moving me?
Liquidity is a way to learn to dérive, to drift along slippery surfaces, where it is unclear who is leading and who is following: doing liquidity is a way to consciously drift. The regular practice of Liquidity became an embodied way of considering modes of governance from the visceral and phenomenological position of the body, by asking who is driving this movement? Is it me, or is it ‘not-me’?
These questions echo the non-dual spiritual inquiry of Buddhism and Vedanta, where ‘me’ and ‘not-me’, are both illusions of duality, modes of thought for separating the subject from the object. What Liquidity turns out to be is a dance that drifts along the edge, a practice of non-duality that turns the body into a sensuous listening device, attuned to more-than-human entities.
Dancing Liquidity becomes a way to develop a devotional ritual, committed to honing a psycho-somatic, non-dual disposition, that morphs the bodymind towards distributed modes of governance that are more-than-just-human.
In developing the method, I used EEG technology – a MUSE meditation headband – to alert me to changes in my brain states. The readings were sonified into a watery soundscape, an audible feedback loop that gave me an
insight into how the movements I was making were affecting my brainwaves. Sudden high-pitched birdsong means I am in a state of relaxation: drifting along with the flow, you might say. But I use the EEG to question and subvert the logic of measure. My aim was to hack, not just the tech but also my own need to know: what was I doing? The distance of observer/observed which is the scientific logic of knowledge tends to interfere with processes of immersion: staying in the practice while measuring it was the challenge of remaining submerged while discovering this liquid logic.
Short bio
Thinking through installations, moving image and sound works, performances, choreographies and drawings, my practice emerges from an inquiry into liveness, corporeality, and threshold states. Unfolding as a speculative Goethean ‘science’ I investigate existential riddles, that return again and again to the Eastern psycho-technologies of nonduality. These ancient spiritual practices of mysticism and devotion provide a generative tension with contemporary ecological, social and political concerns, and through them I propose ‘poetics of activism’ as inner movements that inspire intuitive modes of agency and revolt. My artworks deploy ‘rhythmic fields’: compositions that focus on the ‘wobbling’ uncertainty of threshold moments, convinced that this is the generative point of criticality that ‘insights’ the rites and ethics for a passage to a more-than-human consciousness.
My works have been shown internationally, in galleries, festivals, biennales and public space. Space of the Nameless is my doctoral project, in the Art Department, Goldsmiths University of London.
www.dominiquebb.com
https://www.downloadfreethemes.io/